We have written about this topic before, particularly as it relates to literary works by, for, or about black women or women of color. It is what prompted us to start doing book reviews at Tayé Foster Bradshaw’s Bookshelf.

Year-after-year, we confronted a lot of the same issues with regards to the miniscule titles coming from the major publishing houses. Year-after-year, we encountered a lot of stereotyped images or storylines from YA fiction (like the entire Buford High Series that upon further investigation is written by white males and a grandmotherly white female) to fiction aimed at African-American females.

The topic has reached more general conversation in the last few years with Lee and Low being one of the booksellers advocating for more transparency on the gatekeepers at the publishing house. This recent article with compiled statistics and easy-to-understand graphics helps illustrate the issue.

The recent pulling of the “happy slave” whitewashed historical fiction children’s book, , one of  Scholastic’s recent children’s book offering s,helps propel the need for more diverse books to the mainstream. It not only quenches a thirst of women of color who do read, opens opportunity for writers of color, but also helps Caucasian readers explore cultures they are unfamiliar with, even within their own community, helps white children see children of color (black , Latino, Native, and Asian) in non-stereotyped roles, and helps to further efforts for a more diverse, more equitable, and more inclusive society.

Let’s hope that with efforts from a broad spectrum of writers, publishers, agents, parents, teachers, readers, and booksellers, that we won’t have to worry about a miniscule amount of diverse reading materials, but a bounty of too many to read in one year.

I started writing literary criticisms of black female literary works almost ten years ago when I became extremely frustrated by the generalized, stereotyped, and hyper-sexualized stories being pushed out by a lot of publishing houses.

My now middle-school daughters and I were visiting a local mall in the St Louis area and wandered into a bookstore that still held space in that mall. We ventured to the dwindling African-American literature section and started looking at books. Well, I was looking, they were drawn to the back to the children’s sections and brightly colored blocks.

Book-after-book from the shelf left me more and more disappointed in what I saw.

At the time, I was mentoring a group of middle school girls from challenged backgrounds. I would have been concerned to introduce them to the books that either showed a scantily clad woman or one drapped in jewels seductively drapped on the hood of a luxury car with a shadowy figure of a man in the background.

There has to be more, I thought.

After our visit to the mall, I went home and looked at volumes and volumes of books I had on my shelf.

I decided to take Toni Morrison’s advise and write what I was missing. I’m still working on the stories and poetry, but I could immediately give what I wante in terms of book reviews and suggestions.

The books reviewed have been by black woman across the diaspora. Being of West Indian (Haiti/Dominican Republic) ancestry and ties to New Orleans Creole people, I knew there was a global aspect to our stories that was waiting to push through the marketed clutter.

It also prompted me to keep asking why only some stories made it to the stores. Surely there were other women in general and black women in particular who wanted to read stories of fully actualized characters with real lives, real challenges, and real dreams beyond some contrived assumption of what we were about.

One of the things I am challenging myself to do this year, 2016, is to increase my reviews beyond black women of the diaspora and discover women of color across the globe. I have found that oftentimes our hopes and dreams are universal. It is a hope that in connecting that universality that publishers will take more chances and let the people decide what is marketable beyond a stereotyped image of our lives.

I used to write for The Kirkwood Patch under my “real” name. It was a community resource. The repost I’m linking here was for a list of summer books for the entire family. It is stil timely. I get asked quite often for suggestions about books, particularly diverse books for middle and high school students.

If you are looking for something good to read, to engage the entire family, to put down the screens and open a real book, these lists may be a great place to start. Find an independent bookstore in your city and engage with people who read, if you are in St. Louis, all the libraries have great selections with the renovated downtown library representing a mecca for bibliophiles.

Happy reading!Books for the Entire Family

Writers are worth their rate.

Excellent article on the present and future decisions that need to be made for sustained change. #cutthecheck for only a few is not the answer.

On May 14, tensions inside the St. Louis movement for justice reached a critical stage. Some younger protesters felt that more established organizations were hoarding money that should be going toward basic needs. They were successful in demanding that checks be written to seventeen people personally, and the account designed to meet joint needs was emptied. This piece was written in an attempt to understand and contribute to the healthy debate that has followed.     –John Chasnoff

In the wake of the internal controversy surrounding the Black Lives Matter movement in St. Louis, many have called for a re-thinking of the financial structures governing our dispersal of money. I completely agree that we need a broad-based black-led democratic process around mo 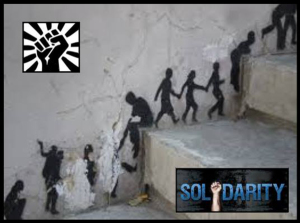 ney and around sorting out issues. I also think MIssourian Organizing for Reform and Empowerment (MORE) and the Organization for Black Struggle (OBS) have gotten a bum…

Claremont Middle School is nestled in the affluent and predominantly white neighborhood known as Rockridge, Oakland. It is an open enrollment public institution consisting of a diverse socioeconomic population of students from all over the East Bay. Many parents send their children to Claremont in hopes of a better education, but something is amiss behind its school walls. There are talks of Claremont becoming a neighborhood school-welcome only to students found in the school’s backyard. To achieve this vision, the current administration is actively working to push out black students and teachers. In this year alone, the school has instituted inequitable student tracking, transferred and fired several black teachers, and eliminated a popular  Ethnic Studies program. “The school will be all white in 3-4 years,” states History and former Ethnic Studies teacher Kurt Kaakuahiuu.

Class Bigotry at Washington University in St. Louis: A Resignation.